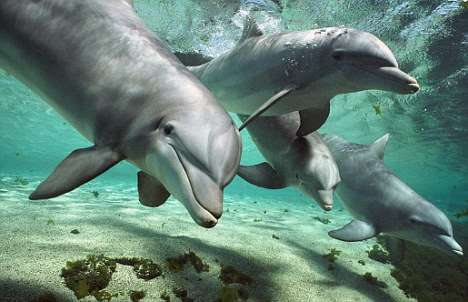 Dolphins are the world's second brightest creatures after humans and have many brain features associated with high intelligence.

So clever are the aquatic mammals that scientists have frequently communicated with those in captivity by rewarding their responses with fish.

But behavioural biologists have now carried out two-way communication with dolphins in the wild in the first study of its kind.


Dr Denise Herzing and colleagues at the Wild Dolphin Project in Jupiter, Florida, established a shared, primitive form of language using sounds, symbols and props.
'Many studies communicate with dolphins, especially in captivity, using fish as a reward,' Dr Herzing told Wired.com. 'But it’s rare to ask dolphins to communicate with us.'
The experiment revolved around both dolphins and humans asking each other for props such as balls and scarves.

A large underwater keyboard formed the focus of the study; each key was painted with a different symbol and emitted a precisely pitched whistle.
When a dolphin pressed a certain key with her nose, researchers would throw the corresponding prop into the water. Should the dolphin instead decide to whistle the pitch that a certain key would emit, then that prop would be thrown in.
Over the course of three years, the scientists played with the dolphins for 40 half-hour sessions.
They found that while young males were less interested in interacting with humans, young females enjoyed the game.
Dr Herzing said: 'This is when the females have a lot of play time, before they are busy being mothers.'
The sessions were at the most successful when the biologists had swum slowly with the dolphins beforehand, particularly if they had made eye contact and mimicked each other's movements.
Highlighting their social tendencies, the spotted dolphins Dr Herzing's team was playing with even recruited another species, bottlenose dolphins, to play the game.
The study was published in the Acta Astronautica journal.

The purpose of this paper is to review and critique studies that have been conducted on dolphin-assisted therapy for children with various disorders. Studies have been released claiming swimming with dolphins is therapeutic and beneficial for children with autism, attention deficit hyperactivity disorder, physical disabilities, and other psychological disorders. The majority of the studies conducted supporting the effectiveness of dolphin-assisted therapy have been found to have major methodological concerns making it impossible to draw valid conclusions. Readers will be informed of the history of, theory behind, and variations of dolphin-assisted therapy along with a review and critique of studies published which purportedly support its use.

1. Dolphin-Assisted Therapy: Claims versus Evidence
Along with other pervasive conditions, those identified as having autism spectrum disorders (ASD) have often been subject to questionable or controversial treatments [1]. As defined by Simpson, a controversial treatment is any method or strategy that has not been validated by scientific support. Such treatments may be of special concern when seemingly extraordinary results are guaranteed. Such concerns may be confounded when physicians fail to anticipate or understand the feelings of desperation that accompany some parents of children with ASD when they come into the office [2]. The combination of desperation and a lack of effective treatment options provided by the physician may lead parents to pursue treatments with little or no empirical support. The number of diagnosed cases of ASD has increased ten times in the past 20 years with the current rate of one in every 166 children born being diagnosed [3]. It was estimated that in 2005 the National Institutes of Health spent $99 million on autism research. This number makes a stark increase compared to the $22 million spent in 1997 [3]. Taken together, there exist many opportunities for the eager pursuit of a wide range of treatments. Among those sharing relatively heightened interest and relatively little empirical support are animal-based treatments.As noted by Morrison [4], for more than 12,000 years, animals and humans have been in therapeutic relationships together. Dogs are generally the most common therapeutic animal, but the literature and historic record suggests that cats, guinea pigs, cockatoos, African grays, horses, chickens, pot-bellied pigs, llamas, goats, and donkeys have all been utilized with therapeutic aims [4]. The rate of animal-facilitated therapy has increased dramatically over the past few years; however, the number of empirical research studies showing the efficacy of this therapy has not.  Betsy Johnson was among the first to discover using dolphins as a therapeutic agent with individuals suffering from neurological impairments [5]. The grace and beauty of dolphins along with their responsiveness to humans have led therapists and researchers to assess potential therapeutic benefits.  This interest, however, has taken a reckless turn and has led to the evolution of a treatment known as dolphin-assisted therapy (DAT) [6]. Dolphin-assisted therapies are primarily advertised through popular media such as television, informational movies, and the internet [7]. According to Marino and Lilienfeld [8], the claims made supporting DAT by the facilities themselves have not been empirically supported, neither has there been an increase in peer-reviewed papers published on the topic from the 1970s to 2007. Researchers and practitioners of DAT as well as parents with children diagnosed with an ASD should be aware that support for this type of treatment has not been empirically validated. Studies that have been held up as supporting DAT have serious methodological flaws rendering their results weak and meaningless [7–9]. Recent voices in the mainstream media have called for an aid in finding and selecting effective treatments, with the hope of reducing the number of parents chasing down the latest “fashionable” trends in intervention, and instead to base their decisions on valid data [3]. Unfortunately, organizations that have in the past been trusted for guidance, have had trouble avoiding affiliations with special interests [10].  Alternative treatments have sprung up, many with associated risk, with no empirical support and little documentation.  However, many of these unconventional methods have the backing of major organizations supporting families with special needs children.  This paper is an effort to navigate the often-spurious claims in the literature and popular media, and to increase the likelihood that those seeking effective treatment will be successful. The purpose of this paper is to provide a detailed description of DAT, review the studies published supporting DAT, review the studies that have debunked this particular treatment, and summarize the overall lack of empirical support for its use.